Why Are So Many ODs Picking Up Side Hustles?

If you spend any time perusing LinkedIn, Facebook, or other business-related social networking websites, you may have noticed a trend lately, especially among younger generation optometrists. You’ll see one OD posting about a new website consulting business they’ve created, while another might be offering weekend photography sessions outside of work.  Another still is selling their artwork and designs on a print-on-demand website. A scroll through Instagram shows OD influencers doing everything from answering questions about contact lenses to modeling a new pair of Transitions lenses, with the occasional marketing tie-in. There are even some optometrists who are buying up property and renting out apartments for extra income. ODs are turning their hobbies into lucrative side-hustles. But what may seem on the surface a creative way to make some spare change off a passion project actually suggests a more concerning motivation lurking beneath. Why are so many optometrists suddenly pursuing these side hustles?

The truth is that many optometrists, especially graduates within the last decade, are feeling the stress of a shifting economic market. Many graduates are left facing a hefty amount of debt as optometry school tuition rates continue to climb, even though reimbursement rates stagnated twenty years ago. An article by Review of Optometry from a decade ago was already highlighting this alarming trend. In 1992 the average optometry student was graduating with about $64,000 in debt, while in 2002 it was closer to $105,000. Now, it is not uncommon to hear students graduating with well over $200,000 in debt simply due to tuition fees. Add into that the cost of living is also steadily rising, and you have a recipe for heavy financial burden. This wouldn’t be so bad except the expected income and reimbursement have not increased simultaneously. Optometrists are still being paid the same as they were two decades ago, while the cost of becoming an eye doctor has run wild. Rather than addressing this clear discrepancy, most optometry programs are simply offering debt management courses. 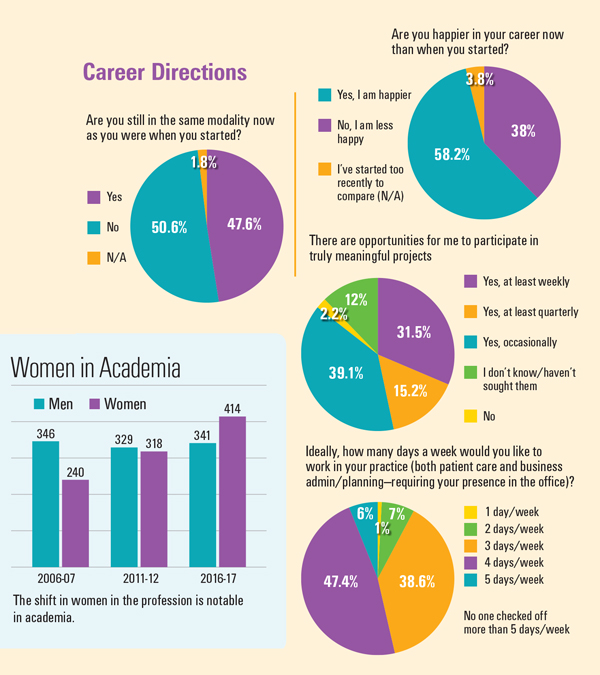 In addition, with more optometry schools opening every few years there are more ODs entering an already crowded market, leading to competition that can further lower expected wages. Private equity firms are scooping up many of the private practices that would have been potential purchase opportunities for ODs, limiting the opportunities to own your own practice. With many online retailers such as Warby Parker opening up brick and mortar locations, as well as larger corporate offices planting new locations on every other street corner, it can be daunting to try to start up a practice with such an oversaturation of competitors. Unless you are an already established practice owner or have a retiring relative that is handing the reins of their longstanding practice over to you, many optometrists find themselves floundering to find positions that pay the salaries we were led to expect, or feel is a fair exchange for the amount of work we provide. As a result, many ODs find themselves supplementing income by pursuing side ventures.

While it is absolutely fine to pursue alternative lines of income (yours truly is obviously working as a writing consultant in addition to working full time), it can be a cause of concern when we see pushing more and more towards these side hustles and away from traditional practice. If we went through the trouble of going through four rigorous years of training, clinical rotations, and even perhaps a residency, we must obviously have a passion for providing primary eye care. We don’t want to see the profession fading into obscurity as it is potentially replaced by online retailers, ambivalent private equity firms, and computerized examinations. We should be fighting to maintain the legitimacy of optometric health care if we want a future where we continue to practice to our full clinical capacity. For those who want to be able to focus purely on optometry practice but also don’t want to be struggling to make ends meet, there has to be an answer.

First, we should be knowledgeable about our own worth. Websites like EyesOnEyecare provide online calculators to help determine the average salary in your state based on your experience level and form of practice. This can be a useful leverage tool when approaching a potential employer. Many younger ODs report feeling “exploited” due to low-paying positions acquired out of school. While some of this may be due to the economic climate, it doesn’t hurt to come prepared with knowledge of what the average salary is, so you know what to expect and know when to walk away from a position that continues to undervalue you.

If you are stuck in a position and feel that a side hustle is necessary, it may be most beneficial to pursue something that can also help propel your optometry career. For example, consulting positions offer the potential to represent yourself as an expert in your field, which may open opportunities as a Key Opinion Leader or paid speaking engagements. A lot of success in the optometric business world comes down to solid networking and business know-how. If you want to build a lucrative optometry practice, you’d be wise to bolster your understanding of finance and business, and it may be worth your while to spend some time brushing up on the topics.

It often starts with simply setting yourself a goal. If you want to own and operate your own private practice, then it may mean spending time to determine the right location, networking with industry leaders and alumni, learning how to manage the financial side of it, and figuring out what needs to be done to accomplish this goal. You may have to make some sacrifices, such as relocating to a more rural area or starting off small and picking up extra days at corporate locations, but if it all contributes to your goal then you can appreciate the progress and have less risk from burnout. A lot of young ODs might be feeling exhausted and overworked because they don’t see all their efforts leading towards a better position or better pay. If you have a set goal and are actively working towards it, you suddenly feel less aimless, and the daily grind can become more bearable because there is a light at the end of the tunnel.

Clarifying what you want to get out of the career can help you make decisions about what hustles are worth pursuing and where to focus your efforts. If you are working towards something, it can be much easier to select your opportunities and know where to place your energy.

As a young OD currently in the thick of it, I share the disappointment that has been expressed by a lot of optometrists in my generation: those turn-key opportunities for self-owned practices just simply aren’t as common as they were anymore, and we have to put in more effort than our predecessors to earn a reasonable income. I think a lot of other medical careers are feeling similar pressures, so optometrists aren’t the only ones finding themselves with disappointing salary caps and stagnant job choices. Some of us may find ourselves eventually shifting into adjacent careers such as consulting or being a medical science liaison rather than in full time clinical practice, but for those who are still passionate about carving out their place in the primary eye care field, there is still a path forward. However, that path may now involve a few detours before you finally find your home.

Please Login to upvote this article

Dr. Kate Gettinger grew up in upstate Illinois and obtained her Bachelor’s in Biology from Truman State University. She worked throughout her undergraduate career at an optometrist’s office and fell in love with the profession. She received her Doctorate in Optometry from University of Missouri-St. Louis Optometry School and received honors for specialization in low vision, including the William Feinbloom Low Vision Award. Dr. Gettinger enjoys treating and managing dry eye, macular degeneration, glaucoma, and diabetes. Her professional interests include ways to improve healthcare access to at-risk communities and improving public health. Dr. Gettinger routinely contributes to optometry publications and writes both educational and advocacy articles. Currently residing in St. Louis, Dr. Gettinger enjoys spending time outdoors with her dog, trying new foods and dining out at local restaurants, playing trivia, brushing up on her French language skills, and exploring new challenges.

Are Optometry Alliances and Optometry Buying Groups Right for Your Practice?

5 Strategies to Beat Burnout in Your Practice

Top 5 Reasons You Should Hire an Optical Consultant

Get Your Eye Care Website to the Top of Google

Is There a Perfect Time to Add an Associate Optometrist?

Best Practices for Checking References in Your Eye Care Practice